Thin films often show elastic anisotropy between the in-plane and out-of-plane directions because of the columnar structure, texture, residual stress, and local incohesive bonding (or microcracking). Then, they show transverse anisotropy and have five independent elastic constants denoted by C11, C33, C12, C13, and C44 with a Cartesian coordinate system, where the x3 axis is along the out-of-plane direction and the x1 and x2 axes lie parallel to the film surface.

However, most previous studies assumed thin films to be isotropic and evaluate one or two moduli with large error limits. Here, we develop an advanced technique to determine the films' Cij using resonance ultrasound spectroscopy (RUS). RUS determines the elastic constants from free-vibration resonance frequencies of solids. Although this approach was used to determine the Cij of bulk metals, composites, and piezoelectric materials, few applied this to thin films, because there are two difficulties. One is the accuracy of measuring free-vibration resonance frequencies and the other is mode identification with the observed resonance frequencies. 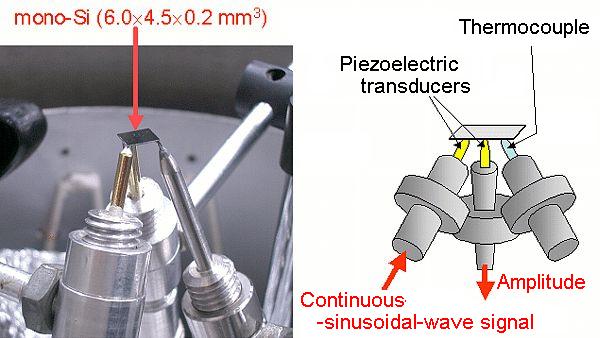 Modes of the calculated resonance frequencies are known. We must find the identical modes from the measured spectrum to carry out the inverse calculation. However, there are a number of resonance frequencies and the peaks often overlap each other, making mode identification difficult. We accomplished unmistakable mode identification using laser-Doppler interferometer to obtain the out-of-plane displacement of the vibrating specimen at each resonance mode using laser-Doppler interferometry. A laser beam is focused on the specimen surface vibrating at the resonance frequency. The frequency of the reflected laser beam changes depending on the vibration frequency because of the Doppler effect. The surface displacement can be calculated from the frequency change. By comparing the measured displacement distributions and those calculated, we make mode identification, leading to the correct elastic constants.

In above figure, black and red line denotes the resonance spectrum of Si substrate before and after the deposition of Co/Pt superlattice, respectively. Thickness of the substrate and Co/Pt superlattice is 200 micron and 1 micron, respectively. Although thickness ratio of the film to the substrate is 0.5 %, the resonance frequencies decreased more than 1 % after the deposition. These frequency shits are larger than the measurement accuracy of the resonance frequencies, and we can determine the reliable elastic constants from the frequency shifts.