Post genome-sequence research focuses on identifications of structures and functions of various proteins related with carcinomas and diseases of the nervous system, and these studies significantly requires higher-sensitive biosensors. Among variety of biosensors, quartz crystal microbalance (QCM) has been most intensively studied because of its two important roles. First, it can be used for the detection of specific protein markers that are excreted by corresponding disorders; for examples, glypican-3 for hepatocellular carcinoma and amyloid-beta protein for Alzheimer disease. Early detection of these protein markers increases the possibility of their permanent cures. Second, a QCM biosensor involves ability of quantitative determination of the kinetic constants related with the biochemical reactions, resulting in the affinity between biomolecules, which highly contributes to the development of an effective antibody for a specific antigen, that is the drug discovery.

Our goal is to develop ultrahigh-sensitive oscillator biosensors. As described below, this purpose definitely requires the WIRELESS AND ELECTRODESS technique.

Below, we show the mechanism of a conventional oscillator biosensor.

The significant advantages of an oscillator biosensor are

The last one is especially important and cannot be achieved by any other methods. Thus, the oscillator biosensor is very attractive. However, it has significant disadvantage, that is, the sensitivity is lower than that of other methods such as SPR and ELISA. Therefore, if we achieve developing an ultrahigh-sensitive oscillator biosensor, it can be very powerful tool in the medical-biology field.

The sensitivity of the oscillator biosensor equals the amount of the frequency change, and it is expressed by the following equation. 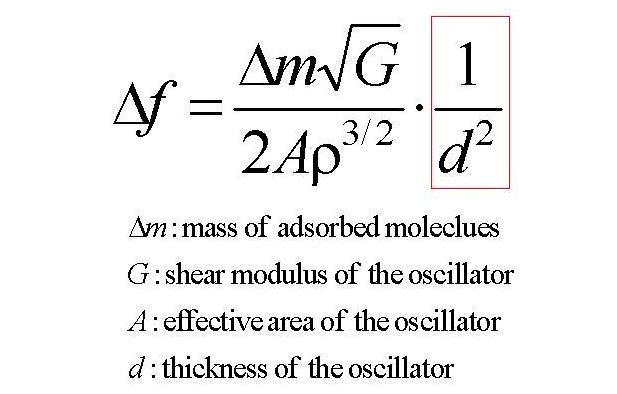 This equation means that the sensitivity is proportional to the square of the thickness of the oscillator. Therefore, to develop a high-sensitive biosensor, we have to make the oscillator thinner. However, this has not been straightforward because of the electrodes and wires: Owing to the high electric conductivity and high affinity to thiol reagents for making a self-assembled monolayer, gold layers have been deposited for the electrodes. but, the mass density of gold is much higher than that of alpha-quartz by a factor of 7.3 and such heavy metallic layers cause very large inertia resistance because the vibrational acceleration shows the maxima at the oscillator surfaces. As the thickness thinner, this effect becomes serious.

Therefore, the most effective and clear solution is to develop the WIRELESS AND ELECTRODELESS oscillator. We have achieved this (see below references for details) and succeeded in the detection of low-concentration IgG molecules (~pM). Below figure shows the frequency change during the injection of the 6pM IgG solution observed by the 50 micrometer thick QCM. 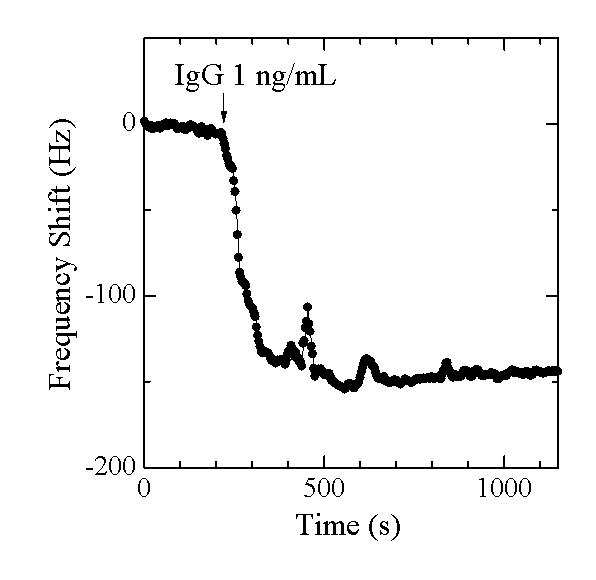 Next, we show the enhanced sensitivity of our electrodeless QCM. Below figure shows frequency responses to the injections of the hIgG solution detected using three electrodeless QCMs with thicknesses of 0.03, 0.05, and 0.3 mm. The sensitivity to the hIgG detection clearly increases as the QCM becomes thinner. 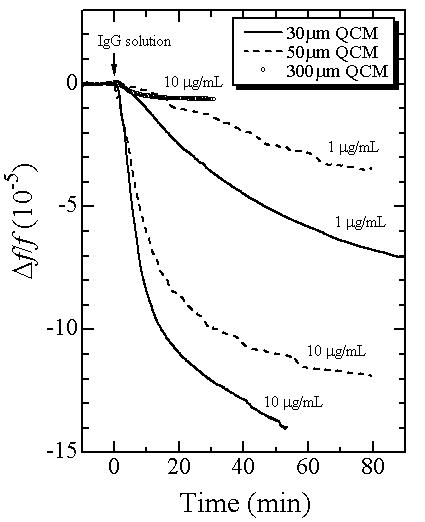