for Studying Elastic Properties of

Irradiation of the film surface with an ultrafast light pulse (~100fs) excites electrons, and their energy is transformed into lattice vibrations during the diffusion of the electrons, leading to the thermal expansion and shrinkage. The ultrasonic plane waves are then generated and propagate along the film thickness direction, repeating reflections between the film surface and the film-substrate interface.

Because the films thickness is accurately measured by the X-ray-total reflectivity measurement, we can determine the longitudinal-wave elastic constant, if we can detect the pulse-echo signals of the ultrasonic wave. However, this is quite difficult because the round-trip time is too short (picoseconds orders) to be measured by the conventional method.

But, picoseconds are not short time for lights. 1 ps allows propagation distance about 0.3mm for lights, while it allows only 5nm propagation distance for ultrasonics. Thus, using advanced light techniques, we can study the nanometer-order phenomena via millimeter-order measurements. This is the essence of the picosecond laser ultrasounds technique. 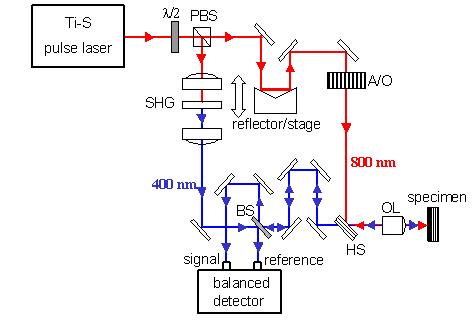 We use a mode-locking titanium-sapphire pulse laser with 100-fs pulse width, 0.7-W power, 80 MHz repetition frequency, and 800 nm wavelength. The laser beam is split into two beams by a polarization beam splitter (PBS). The straight-through output of the PBS is reflected by the corner reflector located on a microstate, which changes the light path of the pump pulse. It is then modulated by an acoustic-optic (A/O) modulator with 100-kHz modulation frequency, and focused on the specimen surface by the 20x objective lens. The pulse-laser power at the specimen surface was about 20 mW. The pump pulse generates the coherent phonon pulses which propagate in the thickness direction and repeat reflections between the film surface and the film-substrate interface.

The other output of the PBS were frequency-doubled (400 mm wavelength) by the second-harmonic-generator crystal of beta-BaB2O4. It was further split into two beams by the beam splitter (BS); one enters the balanced photo detector to produce the reference signal and the other irradiates the specimen surface as the probe pulse to detect the phonon pulses via the photoelastic effect. By changing the path length of the pumping light, we can change the time delay between the pump and probe lights. The output signal of the balance detector entered in a lock-in amplifier to monitor the relative change of the intensity of the reflected probe pulse. 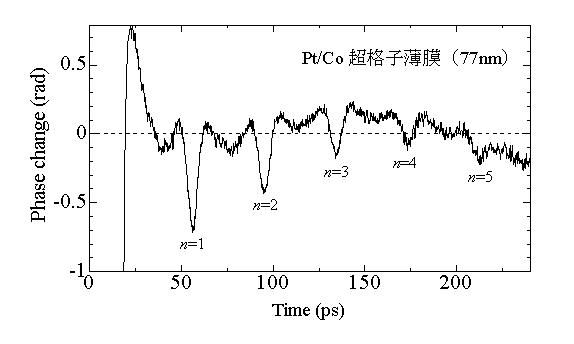 Above figure shows an example of the time-resolved reflectivity variation of the probe light obtained for 77-nm Co/Pt superlattice thin film. Pulse-echo signals of the longitudinal wave is clearly detected. Thus, we study the relationship between the elasticity and functions of ultrathin films.